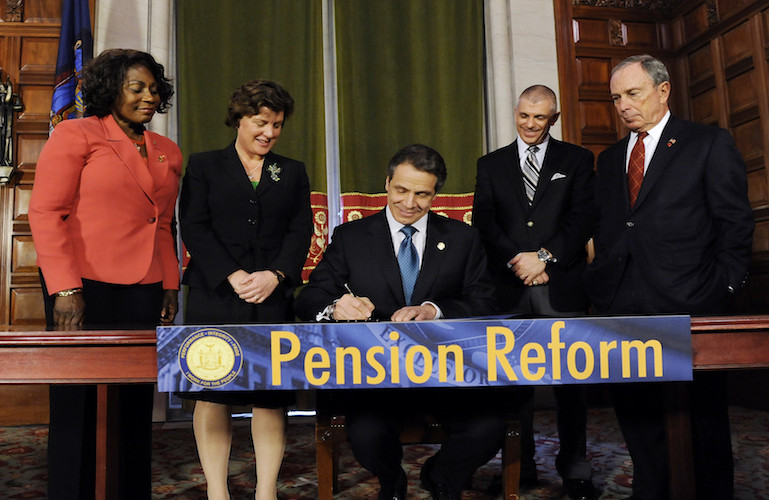 Fourteen states have similar periodic referendums. As I describe in a recent journal article, government employee unions, especially teacher unions, have in recent decades led the opposition to a “yes” vote, in terms of both organization and money.

The unions fear that a convention would reduce their bargaining power, especially over pensions worth hundreds of billions of dollars. These fears are highlighted in their communications to members. For example, in one widely used line, members are told, “If you stay home and don’t vote [on the convention referendum], that’s the same as voting against your pension.”

Pro-convention groups, attempting to defuse opposition from this 800-pound gorilla of constitutional convention politics, have usually claimed that a convention would not risk union pension protections. For example, Bill Samuels, who leads the advocacy group “People’s Convention,” argues, “there is no risk in New York State of labor unions losing their pension protections or other rights enshrined in our current constitution.”

But such claims have been ineffective because the unions have been too smart to be fooled. They are keenly aware of the public’s envy of government pensions, which tend to be more generous than private pensions, and fear a convention would enable the public to act on its envy. Supporting their fears, Princeton Survey Research Associates International found:

Unfortunately, unions’ presentation of their concerns to the public has been grossly misleading. As with any politically sophisticated special interest group pursuing an unpopular agenda, the unions have tried to exercise their influence in the shadows while framing their opposition in terms of popular causes and groups.

With both convention proponents and opponents avoiding the pension issue – albeit each for different reasons – no state in recent decades has included a thoughtful debate about public pension policy as part of the larger conversation on whether to call a convention. But if unions have good reason to believe that a convention would debate pensions – and I believe they do – then the public deserves to have that debate prior to voting for a convention on the November ballot.

Here are some questions to jumpstart such a debate:

The periodic constitutional convention referendum was designed as an institutional mechanism – the only such mechanism in New York state – to allow the people to bypass a Legislature that either won’t reform itself or is unduly influenced by special interests. In the coming months, government unions will spend millions of dollars promoting the argument that a convention won’t function as intended. But perhaps the unions’ true fear is that it will function as intended – at least regarding the big-dollar issue driving their opposition: preserving the unpopular status quo on government pensions.

I believe their essay has made a valuable contribution to the pension debate relating to a New York State constitutional convention, but I have seven questions their essay didn’t address to my satisfaction:

Second, they do not discuss federal bankruptcy law, which provides a mechanism to override contract law. The interpretation of this vague law is still not settled when local government units go bankrupt. Practically, it becomes a question of not whether but what contracts will be broken and to what extent bondholders vs. pension recipients (and various subcategories within those larger categories) will be the losers. When government contracts are written in an inconsistent manner, it may also be impossible to know which will be honored until there is a lawsuit to answer the question.

Fifth, they don’t consider polls when citizens are asked to make tradeoffs between paying pension obligations and paying higher taxes or receiving substantial cuts in vital public services such as schools, libraries, health, and transportation.  Poll results tend to be very different when framed in this way.  If the pension issue became a politically salient issue after a convention were called, the tradeoff framing would most likely generate a more reliable electoral prediction.

Sixth, they don’t explain why public union leaders have privately been very worried about the public’s pension envy. The unions have excellent polling operations for internal use, and it is unimaginable to me that they haven’t polled the public on this question. It’s my judgment that union leaders don’t shoot from the hip; they have outstanding political smarts based on excellent research.

Seventh, assuming arguendo that their argument is sound that a convention wouldn’t ultimately propose an amendment restricting pension rights, they don’t address the possibility that a convention might publicly debate such a proposal. Currently, public pension envy, including the reasons for it, is one of the many taboo topics that legislators of both major political parties don’t find it in their political interest to discuss. But conventions excel at discussing issues that powerful special interests don’t want a legislature to discuss publicly. That is partly because most delegates won’t face a re-election battle (e.g., delegates are limited to one-term as a delegate), as convention accountability comes through a popular referendum on whatever amendments are proposed. Special interests fear such a public discussion because they know it might get out of control and change public opinion at not only the state but also local government level where many of the same issues are on the bargaining table.