Citizens Union has taken the lead in organizing support for a New York State constitutional convention.  There has been no similar announcement for a no campaign.  This announcement is a major development.  Citizens Union has played a leading role in New York good government reform going back to the late 19th Century, and it remains highly respected and influential to this day.  Copied below is the body of the announcement from Citizens Union, included in its January/February 2016 issue of The Reformer.  A more high profile announcement with many more details will come later. 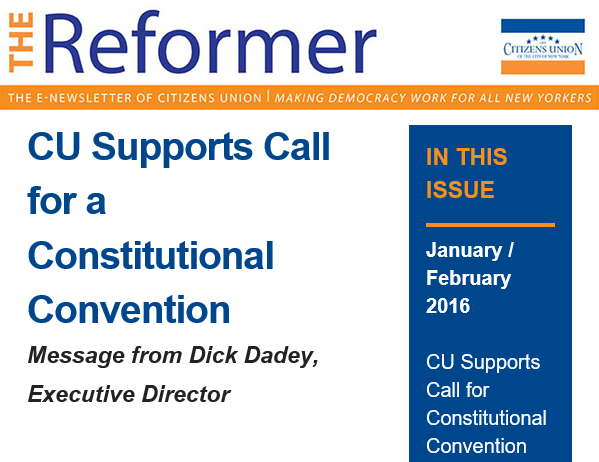 Citizens Union is pushing hard for Governor Cuomo and the State Legislature to finish the job on ethics, which should be a no brainer given the 2015 convictions of former legislative leaders Sheldon Silver and Dean Skelos (their convictions raised the number of legislators forced from office to an appalling 33 since 1999 according to our Corruption Tracker).

But as you know, in spite of CU’s successes over the past ten years, achieving sweeping legislative enactment of government reforms is a difficult task.  Much has been won, but the list of reforms still needed is longer than the list of those achieved.

As New Yorkers, we will be given a rare and important opportunity in 2017 to make reform happen on a scale that the legislature has never addressed.

In 2017 you and I – as New York State voters – will be asked whether we want to convene a constitutional convention on the general election ballot. Every 20 years this same question is put forward to the voters.

As members and supporters of our work, I am happy to tell you in advance of our public announcement that Citizens Union will urge New Yorkers to vote YES in 2017.

At Citizens Union, we believe that a modern state convention would allow New Yorkers to take ownership of the future direction of our NYS democracy, our government structure, and political processes. The convention offers the potential for a moment of renewal and reform steeped in public participation, and for individuals from around the state to fashion a potentially new deliberative and representative democracy.

Through this convention, we can build into our state constitution a positive vision for honest and ethical state government. This would include provisions to prevent corruption, and much more: clean campaigns, fairer elections, legislative and executive branches that are more accountable and balanced, a better court system that is efficient and streamlined, strong and functional local governments, and methodical maintenance of the constitution.

Over the coming weeks and months, Citizens Union will release a policy briefing on this issue, which will include background information and a summary of our position. We will speak with civic leaders and organizational partners to grow a coalition of supporters for the ballot question. And we will conduct an educational campaign leading up to the 2017 general election, to share with New Yorkers why we believe that the constitutional convention presents a crucial and dynamic opportunity to reform state government.

Albany’s culture of corruption and resistance to reform must change. The chance to do so will soon fall directly to New Yorkers – like you and me – to make that happen and with your support, Citizens Union will lead the way.