A Political Primer on the Periodic State Constitutional Convention Referendum

This short course, A Political Primer on the Periodic State Constitutional Convention Referendum, was originally presented at the Annual Meeting of the American Political Science Association, Philadelphia, PA, on August 31, 2016 from 2:00 pm to 6:30 pm.  Between 2016 and 2034 at least one state will have such a referendum at least once every two years.  This course is intended as a resource for local opinion leaders who have a periodic state constitutional convention referendum in those states.

The course was produced by J.H. Snider, editor of the State Constitutional Convention Clearinghouse and the New York State Constitutional Convention Clearinghouse.  The Law & Courts Section of the American Political Science Association published a summary of the course in the form of a symposium in the Fall 2016 issue of its newsletter. The four course participants who contributed to the symposium are:

J.H. Snider, President of iSolon.org and Editor of The State Constitutional Convention Clearinghouse 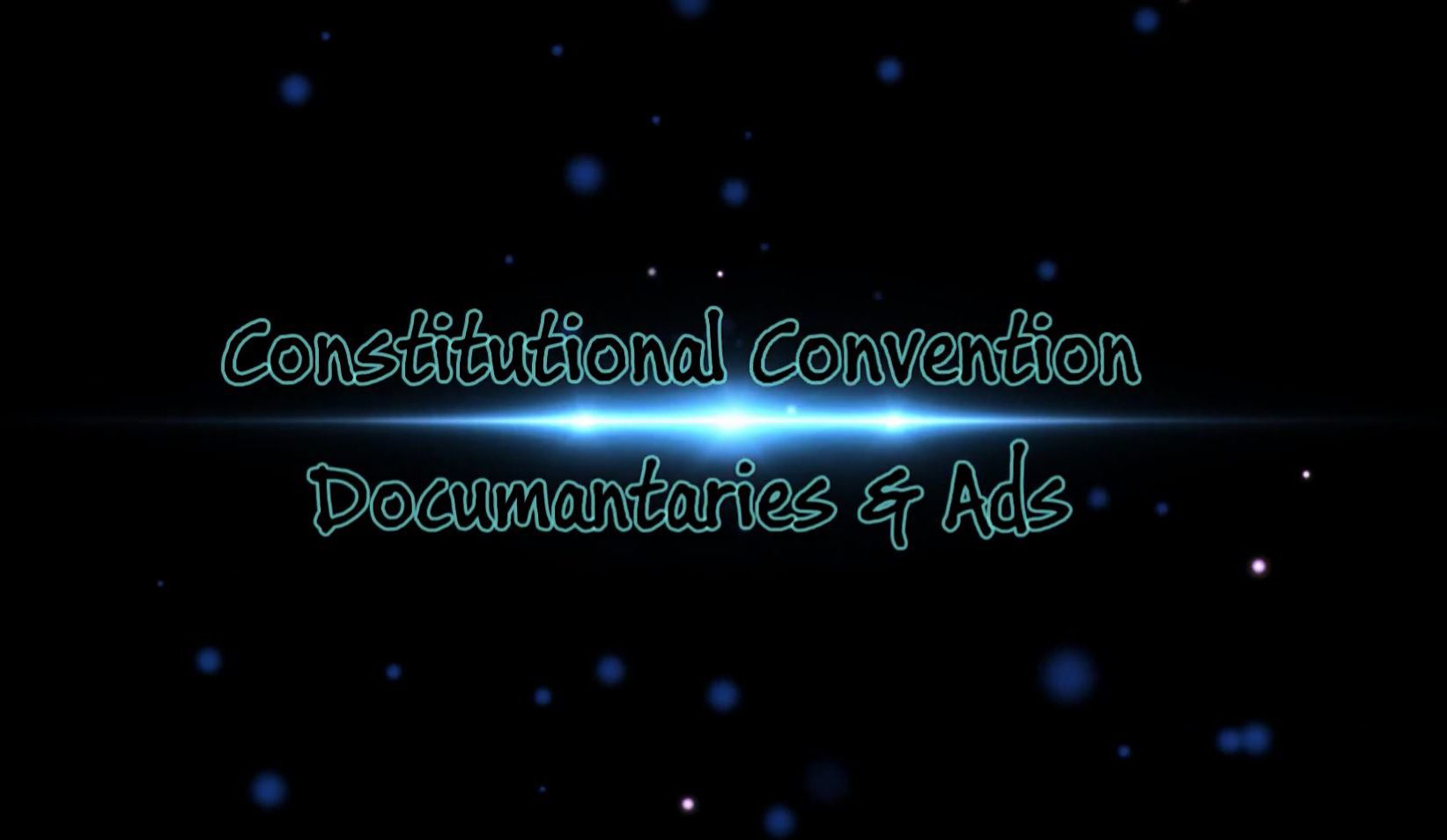 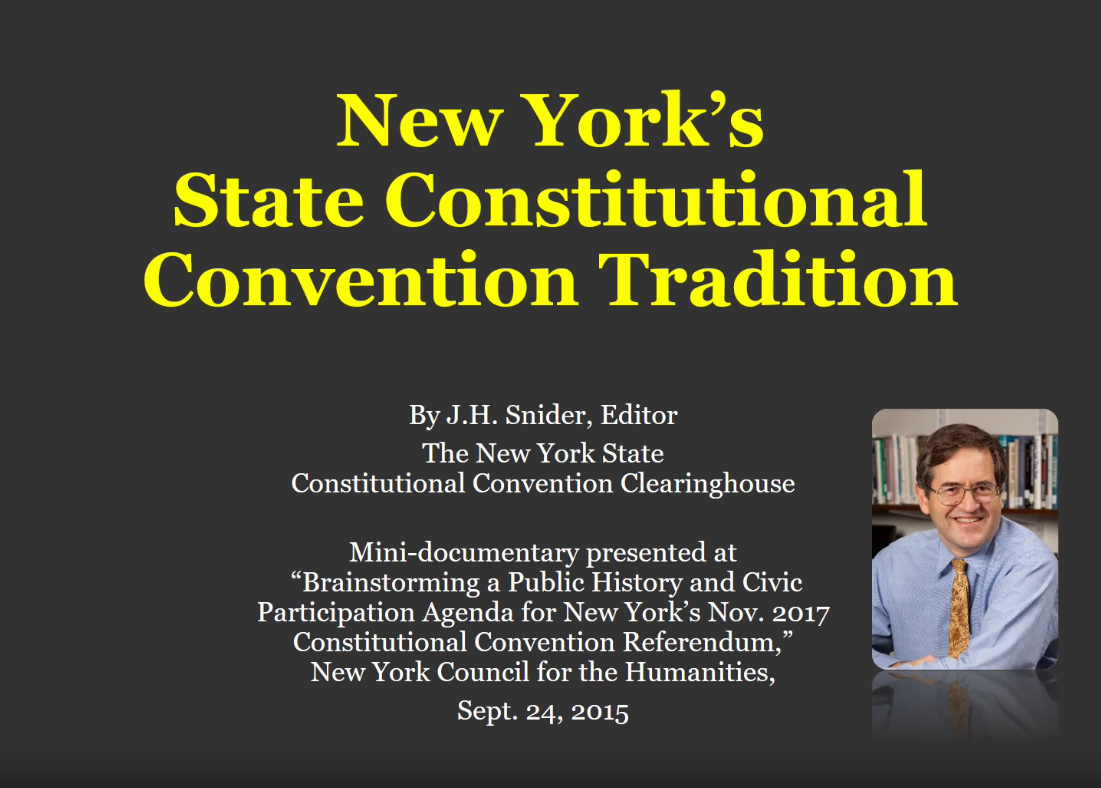 Note: The course panels were video recorded in five 33 minute segments, and YouTube doesn’t allow videos of greater length than 1 hour, which prevented consolidation of the segments into a single video.  As a result, the lengths of the video segments below do not correspond to the lengths of the panels.  Panel #2 was divided into three parts.  The fourth panel was consolidated into one 43 minute video.

Total Length of All Four Panels: 2 hours, 26 minutes, 10 seconds.  The full playlist, which can automatically play all the segments in a continuous sequence, can be found here.

William Blake is assistant professor in the Department of Political Science at the University of Maryland, Baltimore County. His research interests include judicial decisionmaking, public attitudes towards the Constitution, religion and law, and baseball and law.  He is the co-author with Sanford Levinson of “When Americans Think about Constitutional Reform: Some Data and Reflections,” forthcoming.

Richard Briffault is the Joseph P. Chamberlain Professor of Legislation at Columbia Law School and Vice Chair of Citizens Union. His research, writing and teaching focus on state and local government law, legislation, the law of the political process, government ethics and property.

He is co-author of the textbook State and Local Government Law (7th ed. 2009); principal author of Dollars and Democracy: A Blueprint for Campaign Finance Reform (the Report of the Commission on Campaign Finance Reform of The Association of the Bar of the City of New York 2000); and author of Balancing Acts: The Reality Behind State Balanced Budget Requirements (20th Century Fund Press 1996) as well as more than seventy law review articles.

In 2014, Professor Briffault was appointed Chair of the Conflicts of Interest Board of the City of New York. He was a member of New York State’s Moreland Act Commission to Investigate Public Corruption (2013-14), and served as a member of or consultant to several New York City and State commissions dealing with state and local governance including the New York State Commission on Local Government Efficiency & Competitiveness (2007-08), the Temporary New York Commission on Constitutional Revision (1993-95), the New York City Real Property Tax Reform Commission (1993), and the New York City Charter Revision Commission (1987-89). He is currently the Reporter for the American Law Institute’s project on Principles of Government Ethics. He is also vice-chair of Citizens Union of the City of New York.

John Dinan’s research focuses on state constitutionalism, federalism, and American political development.  He is the author of several books, including The American State Constitutional Tradition and Keeping the People’s Liberties: Legislators, Citizens, and Judges as Guardians of Rights, and he writes an annual entry on state constitutional developments for The Book of the States.  He is the editor of Publius: The Journal of Federalism and is a past chair of the Federalism and Intergovernmental Relations Section of the American Political Science Association.  He received his PhD from the University of Virginia.

Professor Farrell is a member of the Royal Irish Academy. He is a specialist in the study of parties, elections, electoral systems and members of parliament.  His current research focuses on the role of deliberation in constitutional reform processes. In 2012 he was elected as President of the Political Studies Association of Ireland. In 2013 he was elected as Speaker of the Council of the European Consortium for Political Research. Professor Farrell is founding co-editor of Party Politics.  Prior to his move to Dublin, Professor Farrell was professor and head of Social Sciences at the University of Manchester.

Craig Holman, Ph.D. is currently Government Affairs Lobbyist for Public Citizen.  As Legislative Representative, he serves as the organization’s Capitol Hill lobbyist on campaign finance and governmental ethics. Previously, Holman was Senior Policy Analyst at the Brennan Center for Justice, New York University School of Law. Dr. Holman worked closely with reform organizations and the Democratic congressional caucus of the 110th Congress in drafting and promoting the “Honest Leadership and Open Government Act,” the new federal lobbying and ethics reform legislation signed into law on September 14, 2007. As a consequence of this legislation, Holman is also working with European nongovernmental organizations and members of the European Commission and Parliament in developing a lobbyist registration system for the European Union.

Holman has assisted in drafting campaign finance reform legislation, including pay-to-play legislation, and has conducted numerous research projects on the initiative process and the impact of money in politics. He has been called upon to assist as a researcher and/or expert witness defending in court the Bipartisan Campaign Reform Act of 2002 (BCRA) as well as the campaign finance reform laws of Alaska, Arkansas, California and Colorado. He has authored and co-authored several studies on campaign finance and the initiative process, including four major works entitled BUYING TIME 2000: TELEVISION ADVERTISING IN THE 2000 FEDERAL ELECTIONS (2001); THE PRICE OF JUSTICE: A CASE STUDY IN JUDICIAL CAMPAIGN FINANCING (1995); TO GOVERN OURSELVES: BALLOT INITIATIVES IN THE LOS ANGELES AREA (1992), and DEMOCRACY BY INITIATIVE (1992). Some of his other publications include: “Lobbying Reform in the United States and the European Union: Progress on Two Continents,” in Conor McGrath, ed., INTEREST GROUPS AND LOBBYING (2009); “The Structure and Organization of Congress and the Practice of Lobbying,” in Thomas Susman and William Luneburg, eds., THE LOBBYING MANUAL: A COMPLETE GUIDE TO FEDERAL LAW GOVERNING LAWYERS AND LOBBYISTS, FOURTH EDITION (2008); “Close the 527 Loophole” in Matt Kerbel, ed., GET THIS PARTY STARTED: HOW PROGRESSIVES CAN FIGHT BACK AND WIN (2006); “The Bipartisan Campaign Reform Act: Limits and Opportunities for Non-Profit Groups in Federal Elections,” Northern Kentucky Law Review (2004); “The Nuts and Bolts of Public Financing of State Candidate Campaigns,” National Civic Review (2003); and THE NEW POLITICS OF JUDICIAL ELECTIONS (2002).

Sanford Levinson, who holds the W. St. John Garwood and W. St. John Garwood, Jr. Centennial Chair in Law, joined the University of Texas Law School in 1980. Previously a member of the Department of Politics at Princeton University, he is also a Professor in the Department of Government at the University of Texas. Levinson is the author of approximately 400 articles, book reviews, or commentaries in professional and popular journals–and a regular contributor to the popular blog Balkinization. He has also written six books: Constitutional Faith (1988, winner of the Scribes Award, 2d edition 2011); Written in Stone: Public Monuments in Changing Societies (1998); Wrestling With Diversity (2003); Our Undemocratic Constitution: Where the Constitution Goes Wrong (and How We the People Can Correct It)(2006); Framed: America’s 51 Constitutions and the Crisis of Governance (2012); and An Argument Open to All: Reading the Federalist in the 21st Century (forthcoming, November 2015). Edited or co-edited books include a leading constitutional law casebook, Processes of Constitutional Decisionmaking (6th ed. 2015, with Paul Brest, Jack Balkin, Akhil Amar, and Reva Siegel); Reading Law and Literature: A Hermeneutic Reader (1988, with Steven Mallioux); Responding to Imperfection: The Theory and Practice of Constitutional Amendment (1995); Constitutional Stupidities, Constitutional Tragedies (1998, with William Eskridge); Legal Canons (2000, with Jack Balkin); The Louisiana Purchase and American Expansion (2005, with Batholomew Sparrow); Torture: A Collection (2004, revised paperback edition, 2006); and The Oxford Handbook on the United States Constitution (with Mark Tushnet and Mark Graber, 2015). He received the Lifetime Achievement Award from the Law and Courts Section of the American Political Science Association in 2010.

He has been a visiting faculty member of the Boston University, Georgetown, Harvard, New York University, and Yale law schools in the United States and has taught abroad in programs of law in London; Paris; Jerusalem; Auckland, New Zealand; and Melbourne, Australia. He was a Fellow at the Institute for Advanced Study in Princeton in 1985-86 and a Member of the Ethics in the Professions Program at Harvard in 1991-92. He is also affiliated with the Shalom Hartman Institute of Jewish Philosophy in Jerusalem. A member of the American Law Institute, Levinson was elected to the American Academy of Arts and Sciences in 2001. He is married to Cynthia Y. Levinson, a writer of children’s literature, and has two children, Meira, a member of the faculty at the Harvard Graduate School of Education (after teaching in the Atlanta and Boston public school systems), and Rachel, a lawyer with the Brennan Center in Washington, D.C.

Snider has published dozens of op-eds on state constitutional convention referendums and been a fellow at Harvard University’s Edmond J. Safra Center for Ethics (2011-13) and the Harvard Kennedy School of Government’s Shorenstein Center on Media, Politics and Public Policy (2008).   He came to Washington, DC as an American Political Science Association Congressional Fellow in Communications & Public Policy (1999-2000), where he worked as an information policy fellow on the U.S. Senate Judiciary Committee.  He then served as a fellow and research director at the New America Foundation (2001-2007).  He has a Ph.D. in American Government from Northwestern University, an M.B.A. from the Harvard Business School (with a focus on non-profit management), and an undergraduate degree in Social Studies from Harvard College.

Dr. Weissert became the director of the LeRoy Collins Institute, which is leading The Partnership for Revising Florida’s Constitution, in October of 2007. She is also the LeRoy Collins Eminent Scholar Chair and Professor of Political Science at Florida State University. Prior to taking that position in August 2003, she was professor of political science and director of the Institute for Public Policy and Social Research at Michigan State University.

Her research focuses on federalism and intergovernmental issues and state policy, particularly health policy. She has published over four dozen articles in political science and public policy journals and is the author or co-author of four recent books including Governing Health: The Politics of Health Policy, the third edition of which was published in 2006 by Johns Hopkins University Press. She was the co-author (with David Denslow) of Tough Choices: Shaping Florida’s Future for the Collins Institute. She is the editor of Publius: The Journal of Federalism, an international journal on federalism and intergovernmental relations published by Oxford University Press. Her doctorate in political science is from the University of North Carolina at Chapel Hill.